Entries From The Design Then Code Category:

Posted on December 29, 2010 in Design, Design Then Code, Tutorial

I'm great at starting things, not so great at finishing them. I get really excited about something, work on it intently for weeks or a month or two, then the next cool project catches my eye and I shift over to that leaving the old project to sit forever unfinished.

Near the end of last summer I had an idea of what I could do with these various unfinished projects: turn them into in-depth tutorials. So many friends of mine are designers who have never programmed before, or developers who never learned iPhone development, so the least I could do is re-package these forgotten projects (and new ones!) into something that might teach others what I've learned about iPhone UI design and development.

Design Then Code will be the site where these tutorials are published. If you go there now you can register to be notified when the first set of tutorials are available.

Design, Development or Both

I imagine that current iPhone UI designers would only want the development half, whereas iPhone developers would want the design half. And many others might want to read the entire thing. That's why I split them in two instead of making each one a monolithic guide.

I don't go through every screen and every feature of these fictitious apps. What I discuss is more like a fully functional interface prototype for a single screen. Each tutorial includes high-fidelity design instruction coupled with the UI code to make the interface real for a part of an app, usually the main screen. I think that coding custom iOS app interfaces by hand is an extremely important skill, and I want to teach people what I've learned about Cocoa user interface development.

Here's a preview of the first two tutorials. The first is a futuristic music production app for iPad, the second is a retro, western-themed design app for iPhone. 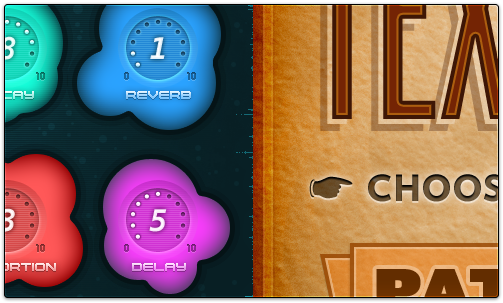 While working on these tutorials, I realized that if someone is starting with no knowledge of Objective-C or the Cocoa frameworks they might have some trouble getting up and running. To help teach people the fundamentals of iOS development I wrote an e-book called Building iOS Apps From Scratch and will be providing that for free so people can learn the basics of Objective-C and Cocoa. If you signup at Design Then Code you'll get instant access to an early (but complete) version of this guide. The final version will launch at the same time as the main site.

Look for the full site and the first set of tutorials soon!